Written by Andrew Conrad
Updated over a week ago

Codetree supports creating dependencies between issues using the "needs #blocker_issue_number" and “needed-by #blocking_issue_number" keywords. If the issue you’re setting up a dependency relationship with is in a different repository you can use a fully qualified issue number like this "organization/repository_name#issue_number".

Similarly If you’re editing issue #1234 and you want to say that it blocks issue #2345 you can type “needed-by #2345” and we’ll setup a reverse dependency. Reverse dependencies are a convenient way of creating “work item” issues that need to be completed before a larger issue (e.g. a feature) a whole is complete.

In the blocker issue, Codetree will list all the issues that are dependent on the blocker.

Once you specify a relationship, here's what the you'll see in the Blocking ("needed") issue: 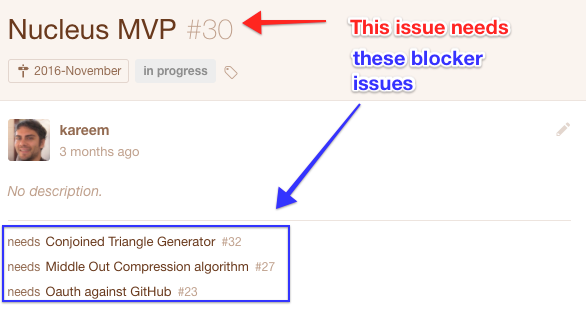 Once you’ve setup dependency relationships between issues you can use Filters to fine all of the issues that are either blocking an issue or block and iissue.

These relationships also show up in the List View. Here's the Blocker with its dependent issues:

And the blocked issue showing the issues it's dependent on:

Dependencies on Kanban Board

In the Kanban board you'll see the same things.

The blocking issue with its dependencies: 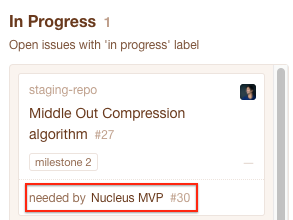 And the blocked issue showing the issues it's dependent on: 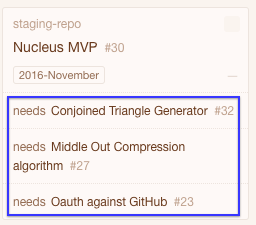 In this article we describe some ways we (and you) can use dependencies to better manage how you deliver features.

Did this answer your question?